Deckhand Jean-Luc tries to rebound after losing two guests, but his inability to sleep in his undersized bunk interferes with his work and his attitude. When the dust settles, the crew gives the guests a lot to mullet over as they pull together a rip-roarin’ 80s rock party. A confrontation about pita bread between Chef Natasha and Chief Stew Daisy doesn’t add up. Captain Glenn pushes the boat hard during a lively sail as primary charter guest Nikki’s father blesses the group with favorable winds. The crew goes absolutely wild during their first night off, and First Mate Gary makes a drunken decision that could have dire consequences for the deck team. 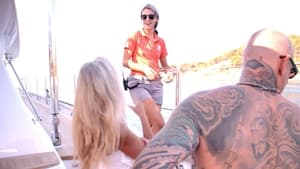