Manami (Taketo Asao) who found a room where K (summer sail) who has been supplying blood for 15 years as the heart of Tokyo Vampire Hotel lies. K knew that Mana Mi was losing his memory, listening to the events in the hotel from Akari (Mr. Norikazu Mori). K such eyes awake such Manami. At that time, two detectives strayed at the hotel. He came following Cody (Shibukawa Kiyohiko) as a suspect of the murder case. I am amazed at the fact that the world has not been destroyed, but I try to believe that a cozy and coexisting prosperous hotel will last forever. I will give Akari the blood of ancient times that I robbed the Dracula clan and try to make it the heart of the hotel on behalf of K. That was the only way to keep happy time for both humans and the Korvin people. At the moment when the hotel dropped the blood of the Dracula clan into the mouth of the acari, and the hotel tried to obtain a new life, K appeared. 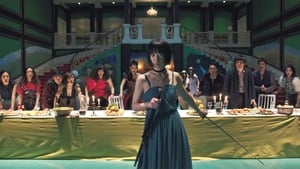